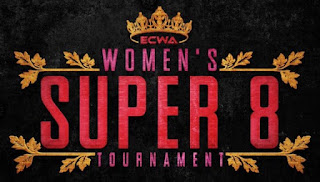 The Women’s ECWA Super 8 Tournament will take place on 7/31/21 in Paulsboro, New Jersey at The Monster Factory. It will be broadcast live on IWTV at 2pm EST. Gabby Ortiz is the first of the eight names announced so far. Tickets for the show are available here:

Killian McMurphy won this year’s ECWA Super 8 Tournament on the men’s side over A Very Good Professional Wrestler in the finals on 5/1/21 in Morganville, New Jersey.

Posted 5/30/2021 01:31:00 AM
Email ThisBlogThis!Share to TwitterShare to FacebookShare to Pinterest