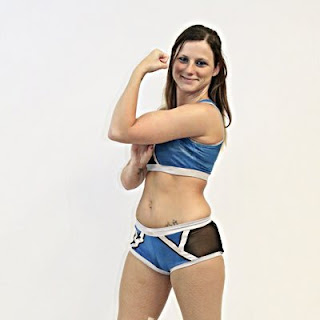 Angel Blue posted on her social media this week to announce she's leaving pro wrestling after fourteen and a half years. The 30-year-old suffered a severe neck injury on 1/6/19 in a 3-Way Match with Shotizi Blackheart and Jenna Lynn (who won the match) after landing wrong in a double team superplex spot at an Inspire Pro Wrestling show in Texas. She wrestled a couple more times in 2019 until her neck issues became too serious to ignore.

She ended up having neck surgery in September 2019.  The situation caused her severe psychical and financial hardships as she wasn’t able to wrestle or work in any capacity while recovering. In late September 2020, she started to prepare for an in-ring comeback. She managed to lift weights and train once again in the ring.

Blue was one of the best heels on the Texas indie scene.

Posted 6/11/2021 05:48:00 PM
Email ThisBlogThis!Share to TwitterShare to FacebookShare to Pinterest