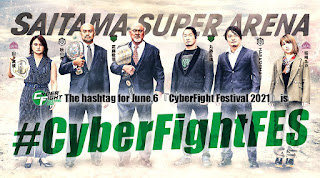 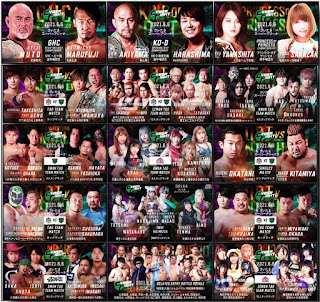 The Delayed Entry Battle Royal is up next with pins, knockouts, submissions, over the top rope,.as the rules.

Yoshiaki Yatsu vs. Makoto Oishi starts it off. Yatsu is in 64 and back to wrestling after having his right leg amputated in 2019 due to diabetes complications.

Antonio Honda is #15 and last.

Honda and Inoue were the final two left. Honda won the match by holding the tights to pin Inoue.

CyberAgent CEO Susumu Fujita came out to the stage to welcome the crowd and viewers. He said CyberFight would give everything they have to offer the fans today. DDT, NOAH, Tokyo Joshi Pro,and Ganbare are all owned by CyberAgent and they’re operated under the CyberFight banner.

Kazushi Sakuraba and Takashi Sugiura (Team NOAH) beat Danshoku Dino and Super Sasadango (Team DDT) when Sugiura pinned Dino after an Olympic Slam..It was a comedy match set up by Sasadango in one of his PowerPoint presentations before it started.

CyberFighr president Sanshiro Takagi, Akito, Kazusada Higuchi, Yukio Sakaguchi, Naomi Yoshimura, and Yukio Naya (Team DDT) beat Kenoh, Katsuhiko Nakajima, Manabu Soya, Haoh, Nioh, and Tadasuke (NOAH’s Kongo stable) when Takagi pinned Haoh after a sit out powerbomb while Kenoh was in a double choke hold from Sakaguchi and Yoshiko (the blow up doll) in a Full On Warfare Match..Takagi cut a promo after and put DDT over as the #1 CyberFight brand and called out WWE and New Japan Pro Wresrling. He said he wants CyberFight to be #1 in pro wrestling.

The triple main event title matches are up next.

Tokyo Joshi Pro Wrestling Princess of Princess Champion Miyu Yamashita pinned Yuka Sakazaki after the Crash Rabbit Heat knee strike. This was the first successful defense for Yamashita in her third reign as champion. It looked like they were going to shake hands after but Sakazaki slapped her in the face then stormed out of the ring.

Naomichi Marufuji pinned NOAH GHC Heavyweight Champion Keiji Mutoh after the Tiger King Zero to win the title. Marufuji is champion for a fourth time. He cut a promo and had Akiyama and Yamashita come out to the ring with him to close the show. They thanked the fans for coming and watching at home on WRESTLE UNIVERSE. The entire event roster met them up on the stage when they left the ring for a big photo op. Fireworks went off as all three champions posed with their titles.

Posted 6/06/2021 05:27:00 AM
Email ThisBlogThis!Share to TwitterShare to FacebookShare to Pinterest