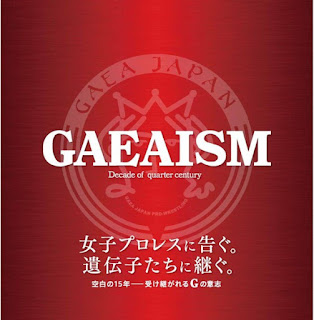 A long video package was shown on the big screen showing clips of matches from GAEA’s ten year run (1995-2005). Also Sprach Zarathustra played as members of the original GAEA roster came to the stage with Chigusa Nagayo out last. They made their way to the ring. Nagayo and Meiko Satomura then made their way back to the stage and stood under the Sendai Girls and Marvelous pro banners as members of those rosters for tonight’s card were introduced into the ring. This was great stuff with lots of pageantry. Satomura and Nagayo then bowed to each other on the stage and walked into the locker room for the event to begin.

The GAEA classic logo is on the mat in full display. There is no commentary at all for the broadcast, just the sounds of the action and the crowd reactions. Tommy Ran is the referee. She still works for groups and was a referee going back to the days of GAEA and All Japan Women.

Mei Hoshizuki, Mikoto Shindo, and Maria beat Manami,Yurika Oka, and Kanon when Hoshizuki pinned Kanon after a drop kick in 13:41. Hard hitting and blistering fast paced action. Kanon got her nose busted up early on and she was gushing blood for a while. She was cleaned up toward the end of the match.

CIMA pinned Leo Isaka after a Meteora in 10:49. They shook hands afterwards.

Sakura Hirota cut a long promo on the video screen to Great Sasuke. She spoke in English at first and did an impression of The Rovk and said “Finally Sakura Hirota has come back to GAEA Japan!”Shr basically said in Japanese that the match will be for her handmade HHH Title belt. She came out to the ring dressed as Akira Hokuto from the 1990s. (Hirota is wrestling in the 6-man later in the show too).

Sakura Hirota pinned Great Sasuke in 10:55 after her finger trigger finisher in the rear end. Comedy match as expected with invisible weapons used.

DASH Chisako pinned Hibiki after the Hormone Splash off a ladder in the ring set up by a diving double stomp off the ladder as Hibiki was wrapped in barb wire and covered in chairs. Hibiki previously wrapped her own self in the barb wire and tried to give Chisako a diving senton off the ladder but missed. Chairs and ladders were pretty much the most weapons used. Lots of action on the ramp and on the floor. Chisako gave Hibiki a flying body press over the stage. Later, Hibiki put Chisako through a table on the floor with a diving senton off the top rope. Time of the fall was 19:49.

Meiko Satomura was mentioned as the WWE NXT UK Women’s Champion in the video package on screen for the semi main event featuring GAEA legends in a 6-man Tag Team Match.

Meiiko Satomura, Chikayo Nagashima, and Toshie Uematsu beat Chigusa Nagayo, KAORU, and Sakura Hirota when Satomura pinned Hirota after Scorpio Rising in 17:31. Fun match and one of the final times to see KAORU in action as she will be retiring this year.

A video package aired showing key history of the AAAW Title matches and the press conference announcing the return of the titles after years of inactivity.

Hashimoto pinned Kadokura after a powerslam

Chihiro Hashimoto pinned Mio Momono with the Albright Suplex to win the match for Team Sendai Girls and retain their titles plus win the vacant AAAW Single Title and the AAAW Tag Team Titles. Time of the match was 24:09.

Takumi Iroha got in the ring and in the face of Hashimoto. She said she will return to action on 7/19/21.

Hashimoto cut a promo and said Kadokura and Momono could have a tag team titles shot on 6/27/21. It is for the Sendai Girls Tag Team Titles.

Nagayo closed the show. She thanked the crowd and took a bow.