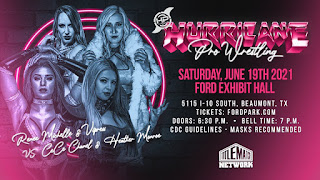 Sammy Kiss is the play by play announcer.

Alexander Frey vs. Johnny Badgate went to a no contest. Ricardo Cage ran in the ring to go after Frey who turned on him at a previous show. Badgate attacked Cage from behind and formed an alliance with Frey. They both beat up on Cage. Badgate choked Cage out with wrist tape.

HPW Cruiserweight Champion Miranda Alize pinned Lucas Riley after a Shining Wizard. Good match with lots of technical wrestling and fast paced back and forth action.

Tama Ku pinned Billy Wayne after a striking shot when Wayne tried to grab him in an arm bar. After the match, Syndel got in the ring and gave Ku a low blow. Syndel and a Wayne briefly laid out Ku with a double team move but it was short lived. Ku popped back up and chased the heels away.