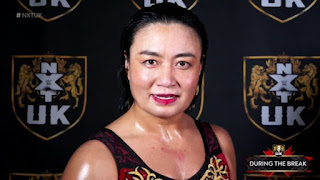 Meiko Satomura defeated Kay Lee Ray to win the NXT U.K. Women’s Title by pin after Scorpion Rising on today’s episode of NXT U.K. on the WWE Network. They were given a lot of time and it was a suspenseful back and forth match. At one point Ray tried to get counted out on purpose and then tried to get herself Disqualified by charging Satomura on the floor with the title belt as a weapon but Satomura ducked.

Satomura is back in Japan as she will be involved in a big pro wrestling weekend. On Sunday she will be part of the GAEA special event in Tokyo where she will team with Chikayo Nagashima, and Toshie Uematsu vs. Chigusa Nagayo, KAORU, and Sakura Hirota. Her Sendai Girls promotion runs a show on Saturday. We’ll have results of both shows right here.

Posted 6/10/2021 03:41:00 PM
Email ThisBlogThis!Share to TwitterShare to FacebookShare to Pinterest