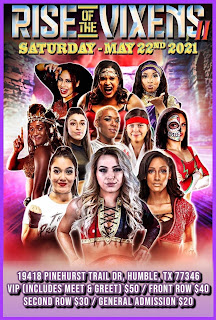 Nyla Rose won a 3-Way Match over Super Oprah and Joe Alonzo by pinning Alonzo with the Beast Bomb as Oprah was knocked out of the ring. After the match, Hollyhood Haley J got in the ring and said she would help Rose get into the main event. Rose agreed.

Jenna Lynn won a 3-Way Elimination Match over Rache Chanel and Shawna Reed. Chanel eliminated Reed first with a code breaker for the pin. Lynn pinned Chanel after the karate kick to win the match.

Fearless Pro Women’s Champion The Insidious One went to a Double Count Out with Red Velvet.

Nyla Rose won the RWR Vixens Title over Raychell Rose (the champion going in) and Amber Rodriguez by pinning Rodriguez with the Beast Bomb. Hollyhood Haley J interfered and hit Raychell Rose in the face with the Vixens Title then taped her to the ring ropes with duct tape at the finish so she couldn’t stop the pin.

The next RWR show is on 6/18/21 at Houston Premier Arena. Raychell Rose will look to get back into title contention on that event as she will face Charity Kane.

Posted 6/03/2021 05:37:00 PM
Email ThisBlogThis!Share to TwitterShare to FacebookShare to Pinterest