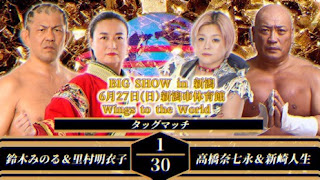 Meiko Satomura will be gone from the company and Japan for an indefinite amount of time. A few weeks ago she announced that she will be moving to England after this show to focus on her NXT U.K. career. She is currently the NXT U.K. Women’s Champion and also a coach for the brand behind the scenes. She was a guest on last week’s Battlemen pro wrestling news and interview show in Japan. She had the NXT U.K. Women’s Title with her at the desk on full display. She did other press as well last week to promote this show and WWE. She talked about the possibility of a “coaching system” being set up one day for WWE in Japan like there is in America and the U.K.

Heidi Katrina was supposed to be on this card but she was not able to make it because of the virus pandemic related issues.

Everyone involved in today’s title matches were brought out with the titles displayed on a table in the ring for the official contract signings. Unlike WWE, there was no arguing or fighting and no tables were flipped over. They presented it as a prestigious and serious moment.

Meiko Satomura came out to the ring with the NXT U.K. Women’s Title and greeted the crowd. This is her hometown. She name dropped NXT U.K. a few times in the speech. She’s done an excellent job of giving the WWE brand PR in Japan and makes the title look credible. A special limited edition t-shirt was being sold at the venue to commemorate her departure.

Yurika Oka pinned Sendai Girls World Junior Champion Mei Hoshizuki after a couple of reversals to win the title. She was also given a trophy and the signed contract as a memento.

Aiger and Rydeen Hagane beat KAORU and Sakura Hirota when Aiger pinned Hirota by using Hirota’s own finisher of collapsing on top of opponents against her.

DASH Chisako was introduced to the crowd. She is injured. She was sitting in a wheelchair at the time keeper’s table and stood up with crutches to address the crowd. She was there as the social media reporter for the show Tweeting out results and clips of the matches on her page. Hibiki interrupted her and yelled on the loudspeaker that she always carries around. Andras Miyagi then came out and started yelling too. She was wearing GLEAT gear. She joined Hibiki in mocking Chisako’s injury. They were getting out of hand with the antics and it looked like they were planning to attack Chisako. Mika Iwata ran out and chased them off and then helped Chisako sit back in the wheelchair. It looks like a tag team match once Chisako is medically cleared.

Meiko Satomura and Minoru Suzuki beat Nanae Takahashi and Jinsei Shinzaki when Satomura pinned Takahashi after the Scorpio Rising. Suzuki and Takahashi went after each other with slaps and chops. Takahashi got him in a choke submission then later gave him a backdrop suplex. Suzuki put Satomura over on the mic after the match and then left the ring to go to the back to let her have everything to herself.  She said her farewell and bowed to all of the crowd.

Posted 6/27/2021 06:11:00 AM
Email ThisBlogThis!Share to TwitterShare to FacebookShare to Pinterest