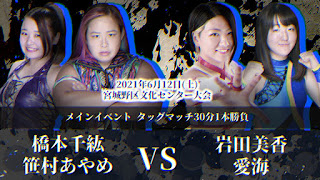 New NXT UK Women’s Champion Meiko Satomura came to the ring and had the title with her. She said she will be moving to the United Kingdom. She defeated Kay Lee Ray for the title on this week’s episode of NXT UK.

DASH Chisako pinned KAORU after the Hormone Splash in 15:25.

Posted 6/12/2021 06:58:00 AM
Email ThisBlogThis!Share to TwitterShare to FacebookShare to Pinterest