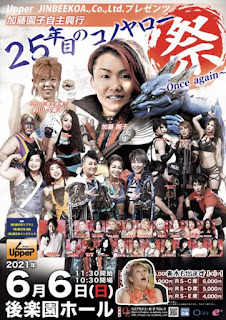 Kato made her debut in April 1995 as part of GAEA. This milestone celebration was delayed by the virus pandemic.

Nanae Takahashi and Arisa Nakajima beat Yumiko Hotta and Kumiko Maekawa when Takahashi pinned Maekawa after the refrigerator bomb in 14:24..

Posted 6/06/2021 01:06:00 PM
Email ThisBlogThis!Share to TwitterShare to FacebookShare to Pinterest