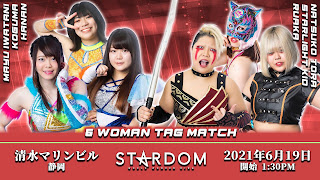 Rina pinned Lady C with a jackknife in 4:28.

Momo Watanabe pinned Hina with the B Driver in 5:54.

Giulia, Syuri, and Maika beat Konami, Saki Kashima, and Fukigen Death when Syuri submitted Kashima with the White Tiger in 13:48.

Natsuko Tora, Ruaka, and Starlight Kid beat Mayu Iwatani, Koguma, and Hanan when Kid pinned Hanan after a Moonsault in 15:36. This was the first event with Kid as the forced new member of Oedo Tai after the ppv stipulation that saw STARS lose to Oedo Tai in the Elimination Match. She had a sad and reluctant look on her face through the mask.

Posted 6/19/2021 02:16:00 AM
Email ThisBlogThis!Share to TwitterShare to FacebookShare to Pinterest