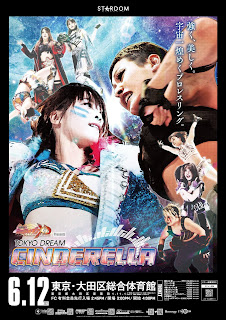 This pay-per-view is only available to buy and watch until 6/15/21 at 23:59 Japan Time then it makes its way over to STARDOM World.

Stipulations are involved for the All Out War 10-Man Tag Team Match with Mayu Iwatani, Starlight Kid, Hanan, Koguma, and Rin Kadokura (STARS) vs. Natsuko Tora, Konami, Fukigen Death, Ruaka, and Saki Kashima (Oedo Tai). It will be elimination rules and the last person eliminated has to join the winning team’s unit.

Rina won a 3-Way Match over Hina and Lady C by pinning Hina in 5:43. This was a pre-show match that did not air on YouTube or the live pay-per-view. The previous STARDOM ppvs did broadcast them.

Maika pinned Unagi Sayaka with a Michinoku Driver II in a Cinderella Tournament 2021 semifinals match in 8:05.

Saya Kamitani pinned Himeka with the Star Crusher in a Cinderella Tournament 2021 semifinals match in 8:51.

It will be Kamitani vs. Maika in the tournament finals which will be the semi main event of the show.

The 3-Way Tag Team Shuffle Match is next. Partners will be chosen by a lottery where rivals might be forced to team up together. Giulia and Natsupoi, Momo Watanabe and AZM, Tam Nakano and Mina Shirakawa are the regular teams walking in. The lottery is taking place in the ring.

So it will be Tam Nakano and Giulia vs. NatsuPoi and AZM vs. Mina Shirakawa and Momo Watanabe. NatsuPoi and AZM won when AZM pinned Shirakawa with a cradle in 12:58. After the match, Nakano and Giulia got into a brief slap fight. AZM strongly hinted at wanting a High Speed Title shot at NatsuPoi in the future. NatsuPoi tried to be friendly but AZM shunned her and reminded her that Watanabe is her regular partner. Giulia and Nakano insulted each other on the mic to close out the segment.

All Out War is up next. Pinfall, submission, Disqualification, count outs, and Over The Top Rules for eliminations. Mayu Iwatani, Starlight Kid, Hanan, Koguma, and Rin Kadokura (STARS) vs. Natsuko Tora, Konami, Fukigen Death, Ruaka, and Saki Kashima (Oedo Tai)

Kadokura and Death were both eliminated by Over The Top Rope rule after a drop kick by Iwatani as they were fighting on the ring.

Natsuko Tora pinned Starlight Kid. The referee was pulled out of the ring near the finish by Oedo Tai. The eliminated members from both sides jumped into the ring and brawled. Oedo Tai got the advantage and then piled up on Kid to help Tora. As per the stipulation, Kid must join Oedo Tai. Tora gloated at the outcome. Iwatani cried on the mic and apologized to Kid. She promised Kid that she will win her back one day. Oedo Tai tossed Kid around and Tora carried her off to the locker room with ease with a big smile on her face.

The 5-STAR Grand Prix Tournament begins on 7/31/21 at Yokohama Budokan. The finals will be back here at Ota City Ward General Gymnasium on 9/25/21.

Saya Kamitani pinned Maika after a Phoenix Splash set up by a Star Crusher to win the Cinderella Tournament 2021 finals in 15:05. She went backstage to put on the ceremonial Cinderella dress and tiara. After the main event she will be presented the trophy and reveal her “wish” as the reward for winning the tournament.

World of STARDOM Champion Utami Hayashishita went to a 30-minute time limit draw with Syuri in the main event. Syuri cut a fired up promo and said she can keep going. Hayashishita said she’s still champion but would give Syuri another shot. The match continued with more time allowed.

The referee ruled it a double knockout draw when they couldn’t answer the 10 count in 13:19 of Overtime. An exhausted Hayashishita got on the mic and said she defended the title but didn’t really win. Natsuko Tora cut her off and got in the ring. She was holding Starlight Kid’s mask and bragged that Oedo Tai was trending on Twitter. She said she wants the next title shot. Hayashishita agreed and then she collapsed to the mat from exhaustion and had to be helped out of the ring. She did manage to walk to the locker room on her own.

Cinderella Tournament winner Saya Kamitani comes back to the ring in the Cinderella outfit to close out the show. The trophy has a glass slipper on it. Kamitani pauses to take a bunch of photo ops. She beams with pride as she addressed the crowd. She said pro wrestling is her fate and destiny. She wants a title shot at Wonder of STARDOM Champion Tam Nakano as her wish. Nakano looked on at ringside and nodded.