Tessa Blanchard Needs Fans Votes And Is Offering A Prize 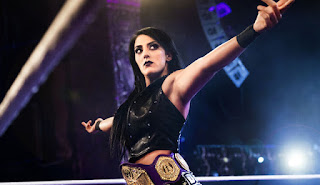 Former WOW Champion and AAA Reina de Reinas Champion Tessa Blanchard is in the running to be on the cover of an upcoming issue of Muscle & Fitness HERS Magazine.

There’s two ways to give the contestants a vote. You can vote for free each day by logging into the Ms Health And Fitness website via Facebook or you can purchase special “Warrior Votes” where each dollar equals a vote. The proceeds of paid votes go to the charity Homes For Wounded Warriors.

Blanchard is currently ranked #1 in her field group of contestants. She says that she will send fans video messages if they vote with “Warrior Votes” for her.

She hasn’t wrestled since 9/2020. That match was for Warrior Wrestling in Illinois where she lost their Women’s Title to Kylie Rae. She was inactivate for most of 2020 because of concerns over the virus pandemic. This year, she and her husband Daga have been coaching at the Hybrid School of Wrestling in San Antonio. They also did some training sessions at Dustin Rhodes’ Rhodes Wrestling Academy in Texas last month.

Posted 6/15/2021 12:16:00 AM
Email ThisBlogThis!Share to TwitterShare to FacebookShare to Pinterest