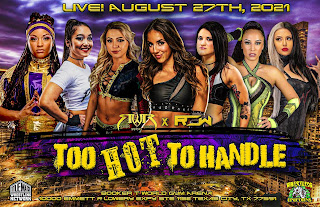 Chelsea Green will be part of the NWA Empower women’s pay-per-view on 8/28/21 in St. Louis, Missouri at Chase Park Plaza.

Green was in the middle of a bizarre situation over the weekend at the Hurricane Pro Wrestling show in Beaumont, Texas. She faced HPW Cruiserweight Champion Miranda Alize and they ended up going to a Double Disqualification when they both assaulted the referee. Texas indie regular Raychell Rose was in attendance but she was not booked on the card. She began heckling and taunting Alize and gave her a double middle finger in an attempt to provoke Alize. This was not an angle or part of any storyline. Rose and Alize have had heat over the years during their time on the Texas indie scene. Allegedly, Alize responded by throwing a drink at Rose during the course of the evening.

Rose was at the show with the promoter of the Texas based Renegade Wrestling Revolution group and at least one other individual. They were asked to leave because of causing a scene.

Ironically, Raychell Rose was scheduled to take on Chelsea Green in the main event of the Renegade Wrestling Revolution and Reality of Wrestling combined event on 8/27/21 in Texas City, Texas at Booker T’s World Gym Arena. Joshi Sun-Times was suddenly informed late last night by a few sources that Green has now pulled out of that show. It was being built all around her and it is titled “Too Hot To Handle” based on her “Hot Mess” nickname. As of this writing RWR, ROW, and Green have not made any public announcement yet.

Posted 7/28/2021 02:49:00 PM
Email ThisBlogThis!Share to TwitterShare to FacebookShare to Pinterest