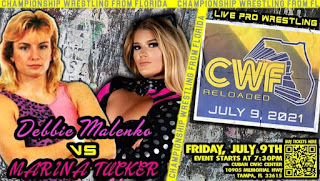 It what should have been a far bigger story than it is so far, Debbie Malenko returned to in-ring action for a Florida group called “Championship Wrestling From Florida Reloaded” which is a homage to the old legendary “Cowboy” Luttrall and Eddie Graham pro wrestling territory. The event took place in Tampa, Florida, USA 🇺🇸 at the Cuban Civic Center.

Malenko pinned Detroit native Marina Tucker after an Ace Crusher when Tucker tried to go high risk off the second rope. This apparently wasn’t a one-shot return, Joshi Sun-Times was told Malenko is accepting other bookings. 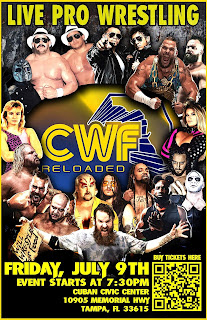 Malenko was trained by Boris Malenko in the late 1980s at the Malenko School Of Wrestling in Florida. She got started on the Florida indie scene and then made her way to Japan where she became a star. Most of her career was spent with All-Japan Women’s Pro Wrestling. Malenko suffered a severe leg injury in a freak accident on 3/11/93 at a AJW event as she and Sakie Hasegawa lost to Manami Toyota and Toshiyo Yamada. She retired due to the injury. The titles she held in her initial few years in the pro wrestling business were the AJW Championship and the Japanese Tag Team Titles (with Sakie Hasegawa).

In 2001, Malenko made a surprise brief return for Japan’s ARSION against Bionic J in an Exhibition Match. They went to the 5-minute time limit draw. She returned to Japan again in 2017 as part of Mariko Yoshida’s Retirement Show. The match saw Yoshida, Kyoko Inoue,and Takako Inoue defeating Malenko, Jaguar Yokota, and Kaoru Ito when Yoshida used the Spider Twist on Malenko for the win. Also in 2017, Malenko wrestled for a Florida group called Legendary Professional Wrestling and feuded with Roxy Rouge over their Women’s Title.

Here are the full results of the CWF Reloaded show from 7/9/21:

Romeo Quevedo pinned David Negron after a moonsault thanks to outside distractions from his heel stable members.

Kevin Sullivan came out managing Andrew Anderson. He cut a promo and said he shed a lot of people’s blood in the original CWF and “sent Dusty Rhodes packing” from the area decades ago. He said he’d like to say he’s sorry for some of the things he did there but he’s not sorry about anything.

Andrew Anderson pinned Ray Beez after a Samoan Drop. After the match, Sullivan gave a Anderson a spike weapon and he wanted him to cut Beez with it. Security ran in and made the save for Beez but they got shoved around by Anderson.

Posted 7/16/2021 01:20:00 AM
Email ThisBlogThis!Share to TwitterShare to FacebookShare to Pinterest