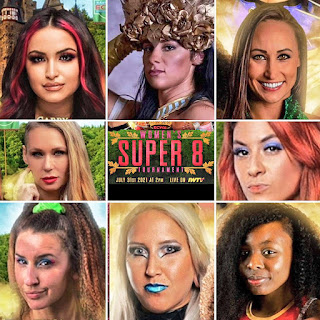 Kaia McKenna is off the show due to a shoulder issue. She should be back in a few weeks after some psychical therapy. Megan Bayne will replace her in the tournament.

All of this year’s tournament competitors came to the ring to be introduced to the crowd one by one with the trophy on display. Brady Hicks and A Very Good Professional Wrestler are the broadcast team. They were introduced in the ring as well. AVGPW did his gimmick where he hogs the spotlight as his theme music plays..

Vicious Vicki beat Gabby Ortiz by submission using her legs for a choke hold in a tournament match.

Ashley D’Amboise pinned Adena Steele with a Michinoku Driver in a tournament match.

IWTV Independent Champion Wheeler Yuta pinned Killian McMurphy in a match that was the 99th defense of the title. The referee was accidentally bumped by both guys. While he was down, McMurphy’s heel manager Dustin Wilson got in the ring to try to hit Yuta with the title belt. A Very Good Professional Wrestler left the broadcast table and gave Wilson a big slap followed by a DDT. He then threw Yuta and McMurphy out of the ring to the floor and woke up the referee to try to get both guys counted out but it didn’t work. AVGPW is currently out of action with a broken leg. Yuta now goes on to defend the title against Daniel Garcia at IWTV 100 on 8/8/21.

Megan Bayne pinned Gabby Ortiz after the swinging uranage slam when Ortiz went for a cross body off the second rope but got caught. Bayne advances to the finals of the tournament.

Ashley D’Amboise pinned Tina San Antonio after a snapping DVD to advance to the finals.

The tournament trophy was brought to the ring for the main event. Bayne has come to the ring each time with her servant but the servant hasn’t stayed at ringside for any of it.

Megan Bayne pinned Ashley D’Amboise after the swinging uranage slam to win the ECWA Women’s Super 8 Tournament 2021. All the other competitors came out to congratulate her. Bayne cut a promo and said it was an honor to be in the ring with the others but the gold always goes home with her. She held up the trophy high on her way to the back. The announcers said Bayne gets a shot at the IWTV Title by winning the tournament. 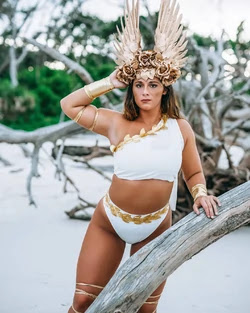 Posted 7/31/2021 04:19:00 PM
Email ThisBlogThis!Share to TwitterShare to FacebookShare to Pinterest