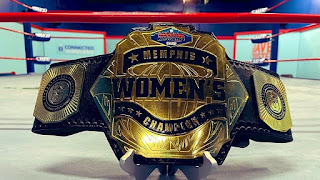 Nikki Lane won a Gauntlet Match over Queen Katelynn, Lil Bit, Claudia Solis, Diana Taylor, Rebel Kel, and Paris Kelly to become the first Memphis Wrestling Women’s Champion on this week’s episode of the Championship Wrestling from Memphis TV show. It airs locally in Memphis,Tennessee on CW30 and on YouTube around the world.

Diana Taylor pinned Claudia Solis after a DDT out of the ring corner.

Diana Taylor beat Paris Kelly by Count Out when Kelly refused to even get in the ring.

Nikki Lane pinned Rebel Kel with a jackknife to win the match and the inaugural title. Lame and Rebel shook hands afterwards. Lane’s husband, Austin Lane, got in the ring and gave her a bouquet of roses.

The next CWFM TV tapings are on 7/25/21 at the Wrestle Center in Memphis.

Posted 7/18/2021 02:32:00 AM
Email ThisBlogThis!Share to TwitterShare to FacebookShare to Pinterest