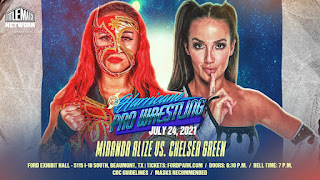 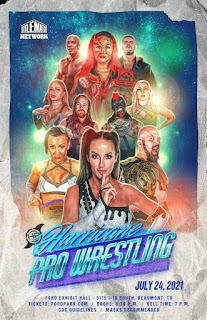 Charity Kane beat Danni Bee in the dark match (thanks to Title Match Network for the note).

Sammy Kiss is the play by play announcer.

Hurricane Pro Heavyweight Champion Ryan Davidson came to the ring and was given a brand new Title belt by the HPW owner.

Jordan Jensen beat Alexander Frey by Texas Cloverleaf submission when Ricardo Cage ran out and caused a distraction. Cage attacked Frey after and chased him out of the building. Jensen was then attacked by The Blue Collar Crew who want the tag titles from him and Tama Ku.

Edge Stone pinned Jared Wayne but it looked like Wayne’s leg was on the ropes. The referee was dazed while making the count after being accidentally squashed in the corner earlier. Stone got on the mic to give a notice to Ryan Davidson. He then gave Wayne a Samoan Drop to send a message to the locker room.

HPW Cruiserweight Champion Miranda Alize went to a Double Disqualification with “Hot Mess” Chelsea Green after they both shoved the referee down. After the match, they joined forces to give the referee a double team DDT. They shook hands and left the ring together. This was Green’s first indie match since 2018. She still has the big cast on her left arm.

HPW Women’s Champion Lady Frost beat Heather Monroe in a Last Woman Standing Match after a Samoan Drop into Legos followed up by a moonsault while Monroe was covered in a pile of chairs. Monroe could not get up to beat the 10 count.

Steve Maclin pinned HPW Heavyweight Champion Ryan Davidson after hitting him with the Title belt when Edge Stone came to ringside and distracted the referee. Stone tried to attack Davidson afterwards but Davidson recovered and gave him a lariat. Referees and members of the locker room came out to separate them. Davidson said they will have a Title Match on the next show which is Aug. 21.

Posted 7/24/2021 10:23:00 PM
Email ThisBlogThis!Share to TwitterShare to FacebookShare to Pinterest