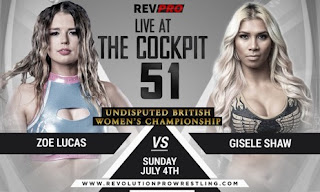 Gisele Shaw defeated Zoe Lucas to win the vacant REV Pro Undisputed British Women’s Title on 7/4/21 at REV Pro’s Live At The Cockpit 51 event in London, U.K. This is the second time Shaw has held the title. Her first win was over Lucas on 2/14/20.

The title was vacated on 6/27/21 when the company announced champion Jamie Hayter decided to take an opportunity with WWE.

Also on yesterday’s REV Pro show, Ricky Knight Jr. beat Dan Moloney in the finals of the Southside Heavyweight Title Tournament to win that vacant title in a 30-minute Iron Man Match. The title was stripped from David Starr in 2020.

Posted 7/05/2021 03:14:00 PM
Email ThisBlogThis!Share to TwitterShare to FacebookShare to Pinterest