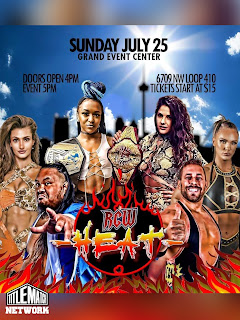 NWA’s Joe Galli is play by play and Don Juan is the color commentator. Carolina Teague is the ring announcer. They have a nice broadcast area set up right on the stage.

Sunday, September 19 is the next show called “RCW Boom Boom” back here at The Grand Event Center.

RCW International Champion Anthony Andrews won a 3-Way Match over Brandon Vice and Trinidan by pinning Trinidan after a powerslam. Andrews’ heel manager Logan accidentally took out Vice on the floor in a lucky accident after colliding with Andrews on the ring while trying to interfere. Vice was not able to get back in the ring to break up the pin.

Gino Medina pinned David Kidd after hitting him in the face with a wrench. Don Juan was Kidd’s manager. He threw the wrench in for Kidd to use then distracted the referee on the ring. Kidd is a baby face and didn’t want to cheat so Medina took advantage of the situation.

NWA Worlds Women’s Champion Kamille Brickhouse pinned Amber Nova after the spear. This was a title match. Galli said Kamille just defended the title at The Gathering in Charlotte, North Carolina last night against Kenzie Paige. He really put over the NWA Worlds Women’s Title by saying it gets defended more often and in more places than the NWA Worlds Heavyweight Title. He said it was the “workhorse title”.

RCW Tag Team Champions DFW Kartel (Lou Gotti and Angel Camacho) beat Drew Who? and Luigi Primo when Camacho pinned Drew Who? after a Vader Bomb. Nastico was the manager of DFW Kartel.

RCW Women’s Champion Kiera Hogan pinned Rok-C with Face The Music. Christi Jaynes came out and taunted Hogan to tease being the next challenger. Kamille then came out and held the NWA Worlds Women’s Title up high. Kamille then walked to the back as Jaynes tried to rush at Hogan who was still in the ring. Referees came out to hold Jaynes back.

RCW Champion Fallah Bahh vs. King Rob Love was scheduled to be the main event but Gino Medina ran out and attacked them and the referee with a chair. He demanded to be put in the match as a 3-Way Match. RCW promoter Brandon Oliver approved it.

Gina Medina won the title by pinning King Rob Love after Eat Defeat. Medina hit Bahh with a chair to hurt him enough to where he couldn’t stop the pin.

Posted 7/25/2021 09:11:00 PM
Email ThisBlogThis!Share to TwitterShare to FacebookShare to Pinterest