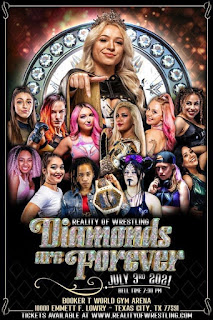 Sharmell Huffman cane to the ring to pay tribute to Adrian Jones who passed away recently. There was a 10-Bell Salute. Jones was the original ROW announcer and worked behind the scenes for several years.

Sadika pinned Karizma after a missile drop kick from the second rope right into Karizma’s back.

Killa Kate won a 3-Way Match over Phoebe and Rache Chanel by referee stoppage with a choke hold on Phoebe.

Posted 7/03/2021 10:34:00 PM
Email ThisBlogThis!Share to TwitterShare to FacebookShare to Pinterest