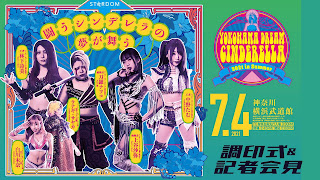 The Gauntlet Tag Team Match is the opener with Maika and Lady C vs. Hanan and Hina vs. Saki Kashima and Rina vs. Fukigen Death and Konami.

Hina and Hanan vs. Saki Kashima and Rina start things off. Rina pinned Hina with a jackknife for the first elimination. Lady C and Maika are out next. Maika pinned Rina with her twisted powerslam finisher.. Fukigen Death and Konami out last. They attacked Lady C  with a chain at the start while the referee was distracted on the outside of the ring. Death and Konami won the match when Death pinned Lady C with a roll up in 15:47.

AZM and Momo Watanabe beat Starlight Kid and Ruaka when AZM pinned Ruaka with the AZUMI Sushi in 13:43. Chaotic closing minutes as the referee was distracted by Oedo Tai members on the ring as Ruaka tried to use an object from ringside as a weapon in the ring without success. Kid now wears a black mask and Oedo Tai colors after being forced to join the unit on the last pay-per-view.

Mina Shirakawa pinned Unagi Sayaka in the finals of the Future of STARDOM Title Tournament to win the vacant title after a draping DDT off the second rope and the Implant DDT in 14:43. They almost went to the time limit in a very exciting back and forth match between the Cosmic Angels partners (they are currently the Artists of STARDOM Champions with Tam Nakano). Shirakawa kicked out of the frog splash and Sayaka kicked out of the Thez Press in the last couple of minutes. Shirakawa cut a victory promo and said she will defend it as often as she can and hold it for all her worth. Sayaka said she wants to be the first challenger. Shirakawa agreed and said Cosmic Angels should go after the SWA Title too (currently held by Syuri). She wanted to shake Sayaka’s hand but Sayaka refused and left the ring in frustration.

Goddesses of STARDOM Tag Team Champions Giulia and Syuri beat Maya Iwatani and Koguma when Giulia pinned Koguma after a Northern Lights Bomb in 20:42. Giulia now has bright orange hair to match her gear. She cut a victory promo which upset Koguma to slap her and Syuri. They want to set a record of successful tag team titles defenses. Utami Hayashishita and Saya Kamitani will be the next challengers. Syuri talked about having the SWA Title too as Unagi Sayaka was shown on camera watching her from the ramp to tease a match between them.

They announced the Blocks for the 5-Star Grand Prix 2021 Tournament which starts on 7/31:

Wonder of STARDOM Champion Tam Nakano pinned Saya Kamitani after the Violet Shooting followed up by the Twilight Dream in 22:27. After the match, Nakano congratulated Kamitani on winning this year’s Cinderella Tournament. She said it made Kamitani stronger but she’s not ready to defeat her for the Wonder Title just yet. She wanted to shake Kamitani’s hand but Kamitani refused and left the ring. Starlight Kid got in the ring showing an aggressive and arrogant side as if being part of Oedo Tai now is turning her heel. She challenged Nakano for the title and said she’s the only capable of beating her. She warned Nakano that she’s not the same person any more. Mina Shirakawa and Unagi Sayaka congratulated Nakano on the win and they all hugged in the ring.

World of STARDOM Champion Utami Hayashishita beat Natsuko Tora by doctors orders in an bizarre finish. Konami interfered and knocked Hayashishita off the ropes to the floor. All of Oedo Tai, including Starlight Kid, stomped on Hayashishita. Momo Watanabe made the save and fought off as many of Oedo Tai as she could. Tora put Hayashishita on a table on the floor and gave her a top rope splash through it. She followed up with a running diving foot stomp off the ring apron right on Hayashishita and it clearly looked like she twisted her leg doing it. Both women were down for a long time. STARDOM Executive Producer Rossy Ogawa and a doctor were at ringside and checked on them. Tora kept holding her leg and could not get up to continue. They referee called a time out to try to give her time to continue. Hayashishita finally got up and sat on the ring. The match was stopped as it was declared Tora could not complete due to injury. Tora got on the mic and said if her leg is broken she wants another member of Oedo Tai to be a new challenger. She ended up getting stretchered out. Hayashishita thanked the crowd for coming and said this wasn’t what she expected or how she wanted to win. She said Tora could face her again whenever she is able to return. Time of the match was 11:33.

Posted 7/04/2021 07:26:00 AM
Email ThisBlogThis!Share to TwitterShare to FacebookShare to Pinterest