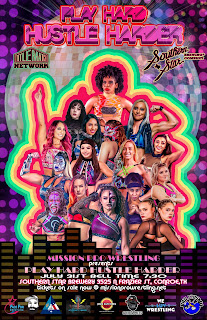 “Play Hard, Hustle Harder” is the title of the next Mission Pro Wrestling event. It takes place at the Southern Star Brewing Company in Conroe, Texas, USA 🇺🇸 on 7/31/21 at 7:30pm CST/8:30pm EST. and will stream live on Title Match Network. They are planning a 1970s disco party theme throughout the night for fans in attendance. Here is the lineup:

Jazmin Allure vs. Alex Gracia in a 2nd Round #1 con. Tournament Match for the MPW Title

JennaCide vs. Vert Vixen in a 2nd Round #1 con. Tournament Match for the MPW Title

The Renegade Twins vs. Madi Wrenkowski and Dulce Tormenta

Tickets for the show are available here: https://www.eventbrite.com/e/mpw-presents-play-hard-hustle-harder-tickets-159327678375

MPW will be on the road in Jacksonville, Florida with 6 matches as part of the Jacksonville Taco Festival at TIAA Bank Field on 7/17/21. The event runs from 11am to 6pm so the bouts will be spread out throughout the day. Here is the card which will air as VOD on Title Match Network at a later date: 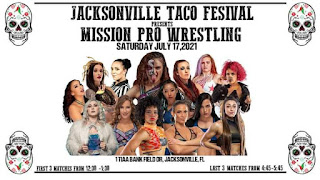 The company will be on the road again with shows in Greensboro, North Carolina on 8/14/21 (with Savannah Evans and Dani Jordyn), Oklahoma City, Oklahoma on 9/11/21 and Tulsa, Oklahoma on 9/12/21. More details to come in the coming weeks.

There will be an MPW benefit show for the San Antonio, Texas Salvation Army on 8/20/21. It’s being called “Thunder Struck” as a 1980s rock music theme. This will be a co-ed event with the finals of the #1 con. Tournament, plus Madi Wrenkowski, Fuego Del Sol, and Chandler Hopkins announced so far.

The Halloween show is on 10/23/21 back at Southern Star Brewing Company in Conroe, Texas.

There are plans to add MPW Tag Team Titles in the future.

The latest edition of “On A Mission” with special guest Savannah Evans is here:

In the interest of transparency, Joshi Sun-Times is one of the sponsors for the 7/31/21 show. Our coverage of MPW and other companies will remain the same without bias or pretense. I just made a decision to try to be part of something that I thought will be fun for once. JST has no input in the MPW booking or production as a sponsor.

Posted 7/09/2021 03:27:00 AM
Email ThisBlogThis!Share to TwitterShare to FacebookShare to Pinterest