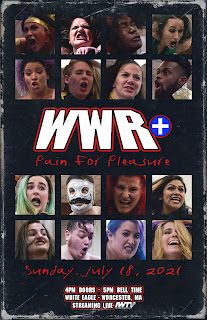 WWR+ “Pain For Pleasure” results from Worcester, Massachusetts, USA 🇺🇸 at the White Eagle on 7/18/21 live on IWTV:

Rich Pallladino is the ring announcer. Paul Crockett and Alyssa Marino are the broadcast team.

Jody Threat pinned Ashley Vox after a Blue Thunder Bomb. Very good and strong opener. They started off chain wrestling a few minutes then went into some high flying and big impact stuff. Vox used the ropes to her advantage with head scissors and hurricanranas. Threat gave Vox a delayed suplex off the second rope. Delmi Exo was at ringside as The Sea Stars are both in singles action on the card.

Becca pinned Delmi Exo after her spin kick finisher. Becca came off the ropes with crossbody at one point in the match and hit Exo in the face awkwardly. It looked painful but Exo seemed fine afterwards. Higher Society came out to gloat about both Sea Stars losing. They told them to stick around to see how winning is done.

Veda Scott Open Challenge was answered by Hot Scoop Skylar. Skylar won by arm bar submission. The two were friends but Skylar attacked her from behind during the ring introductions. She destroyed Scott’s arm with a chair and worked it over most of the match. Scott fought heroically to where it looked like she could pull off an upset but got overpowered.

Rebecca Scott pinned Kayla Sparks after a snap DDT. Really good and intense match with a lot of story. It was Scott’s debut match, but she came off like a confident heel veteran, and it was Sparks’ first match back after 14 years. The fans chanted “Please Come Back” at Sparks. They worked very well together in a great debut for Scott.

Rickey Shane Page pinned Kennedi Copeland after catching her off the ropes in midair and planting her down for the pin. Good match with the story of Page manhandling her and her trying to find innovative and unorthodox ways to satellite around him.

Riley Shepard pinned Kaia McKenna after an Ushigoroshi. After the match, Little Mean Kathleen came to the ring to challenge Shepard to a ffuture match against her. Shepard agreed.

Tina San Antonio pinned Willow Nightingale with a roll up and what looked to be holding of the tights. Damien Adams was the special guest referee and he turned heel to help San Antonio win. He allowed San Antonio to use a chair but took it away from Nightingale when she grabbed it. When Willow had San Antonio covered for the potential win, Adams pretended like he hurt his knee so he didn’t have to make the count. He walked out of the ring with San Antonio and raised her hand to gloat.

Aug. 22 is the next date for WWR+ as part of a double header with AmericanRana. Masha Slamovich and Leyla Hirsch vs. Jordynne Grace and Kimber Lee was announced for the AR show.

Trish Adora pinned Ashley D'Amboise with a very athletic fold over bridging cover. Megan Bayne’s music hit before Adora could even finish her victory moment. Bayne came out with more servants than she had for the last show.

Megan Bayne pinned Davienne after her swinging slam finisher. Good match that once again showcased Bayne but made Davienne look like a strong suffering hero. Bayne gave her a powerslam, backbreaker over the knee, snap suplex, a Samoan Drop, and an atomic drop throughout the match but Davienne would not stay down.

Trish Adora came out to have a face off with Bayne. Adora finally had enough of the disrespect and they traded blows. The entire locker room ran out to separate them as the show went off the air.

Bayne comes off as a big indie star. She’s very convincing as the Amazon strong woman goddess character. Her entrance is a nice presentation with the servants. There are a few women to keep an eye on in WWR+ because you never know who might get signed by WWE, AEW, Impact, ROH, and MLW wanting new talent and playing “keep away” in the roster bidding wars.

Posted 7/18/2021 07:33:00 PM
Email ThisBlogThis!Share to TwitterShare to FacebookShare to Pinterest