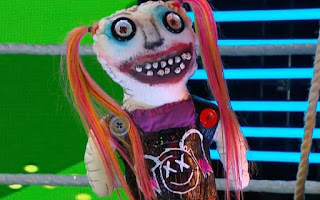 There is talk of the horror movie villain Chucky possibly popping up in some form on WWE Raw in the next couple of months to interact with Lilly, the demonic doll owned by Alex Bliss. The crossover appearance would be to promote the upcoming Chucky TV series. “Chucky” will be a SYFY channel show but the Season 1 premiere episode will air simulcast with sister network USA on 10/12/21 at 10pm EST.
Our sister website “Wrestling…. with Demons” was told that “Chucky” is finally scheduled to wrap up production next week. It’s being filmed in Toronto. Brad Dourif is once again the voice of Chucky. The show was delayed last year because of the virus pandemic. Commercials for the show have already been airing heavily during WWE Raw over the last few weeks as Syfy has high hopes for its success.
If Chucky does show up on Raw, it wouldn’t be the first time he’s done a crossover promotion in the world of pro wrestling. In 1998 he showed up on WCW Nitro to interrupt a Mean Gene Okerlund interview with Rick Steiner in the ring so he could plug “Bride of Chucky” released in theaters that year.
In other Lilly news, despite being panned by most pro wrestling critics, the character has been a hit for WWE Shop merchandise sales. The $30 plush replica of the doll sold out last month. It has been restocked as of this writing.
https://shop.wwe.com/products/alexa-bliss-lilly-plush-doll
Posted 8/04/2021 03:01:00 AM
Email ThisBlogThis!Share to TwitterShare to FacebookShare to Pinterest