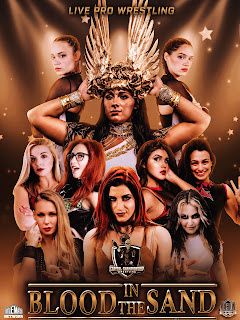 Valentina Vazquez and Vita VonStarr vs. Gabriella and unknown vs. Rebecca Scott and Kayla Sparks vs. The Renegade Twins (Robyn and Charlette) in a 4-Way Tag Team Elimination Match opens the show.Veda Scott was supposed to be the partner of Gabriella but she said she was injured after getting attacked by The Renegade Twins and their manager Kat Spencer. She ended up doing color commentary. She said Gabriella will apparently now wrestle alone against everyone else. The rules are both members of a team has to be eliminated separately and anyone can tag anyone.

Rebecca Scott pinned Valentina Vasquez after a super kick for the first elimination.

Kayla Sparks beat Vita VonStarr by Disqualification when VonStarr refused to stop choking Sparks in the ropes after the referee's five count.

One of the Renegade Twins pinned Rebecca Scott with a roll up immediately after Sparks was eliminated. Gabriella is left alone against the twins as the final three.

One of the Renegade Twins pinned Garbriella after a spine buster. Seconds earlier, it looked like Gabriella managed to tap out a twin with a submission hold but the referee broke it up and the announcers didn’t seem to know how to call it. Both twins ended up double teaming Gabriella to set up the finish and Kat Spencer speared her after the match.

Rebecca Scott was mad at Kayla Sparks backstage for the loss and no longer wants to be a team.

Gabriella cut a demented promo backstage. She said she was left alone because of what the twins and Spencer did to Veda Scott. She said she now knows what they are capable of but soon they will know what she is capable of.

The Renegade Twins and Spencer were interviewed backstage. They were cool, confident and arrogant waiting on whoever can stop them.

The next shows are 9/11/21, 11/6, and 12/4. There will be a tournament to crown the first champion with Masha Slamovich, Max The Impaler, KiLynn King, Willow Nightingale, Lady Frost, Queen Aminata, and Christi Jaynes named so far.