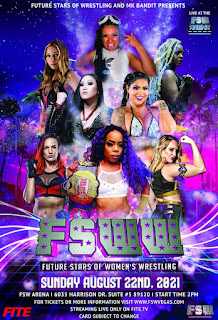 Bryn Thorne won a 3-Way Match over Alice Blair and Tracy Grace by pinning Grace after a running knee strike.

Viva Van pinned Jordan Blue with an Electric Chair Slam. Van is managed by MK who interfered at times but Van ended up winning clean.

Sandra Moone beat FSW Women’s Champion Mazzerati to win the title in the Doors, Ladders, and Chairs Match. She grabbed the title hanging above the ring after power bombing Mazzerati off the rungs of the ladder through a big red door set up by two chairs in the ring. Mazzerati’s face was all bloody during the match. Moone cut a promo after and thanked the crowd. She said she spent so much of her life and childhood in wrestling. She said when she started there wasn’t even a women’s division and now she’s the champion. She thanked the fans, her trainers and her family for their support when she had times of doubts. Good speech right from the heart.