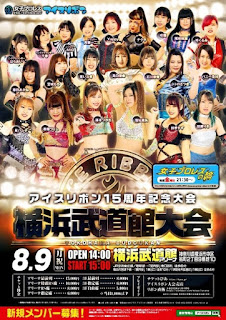 Manami Toyota is at the event. She has been a friend and mentor to the company over the years.

Aja Kong and NATSUMI beat Hamuko Hoshi and Ibuki HoshI when NATSUMI pinned Ibuki after the back fist from Kong in 10:40.

Totoro Satsuki won the Triangle Ribbon Title in a 3-Way Match over Thekla (the champion) and Ram Kaichow by pinning Thekla in 10:20.

Akane Fujita beat Maika Ozaki by referee stoppage when Ozaki fainted in a submission hold. This was a 1# con. Match for the ICEx Infinity Title in 10:05.

Nanae Takahashi pinned Tsukushi Haruka after the One Second EX in 9:14.

FantastICE Champion Rina Yamashita pinned Suzu Suzuki after Splash Mountain on a barb wire chair in a Death Match in 16:34. Suzuki’s face was bloody in the first few minutes and she had blood running down her lower back after the match. Yamashita helped her and walked with her to the locker room when it was over. They used light tubes and Hellboards as some of the weapons.

An intermission was taken so they can clean up the ringside and replace the canvas. It will be double duty to come for Tsukasa Fujimoto and Hiroyo Matsumoto. They defend the International Ribbon Tag Team Titles against Risa Sera and Maya Yukihi, then Fujimoto defends the ICEx Infinity Title against Matsumoto in the main event.

Not much rest for Fujimoto and Matsumoto or time to think about the Tag Titles loss. After Sera and Yukihi had their victory moment in the ring things settled for the main event introductions to begin.

ICEx Infinity Tsukasa Fujimoto pinned  Hiroyo Matsumoto in 17:21 with the Tsukka-Chan Bomb. Akane Fujita will be the next challenger at Korakuen Hall on 8/28/21.

Posted 8/09/2021 06:06:00 AM
Email ThisBlogThis!Share to TwitterShare to FacebookShare to Pinterest