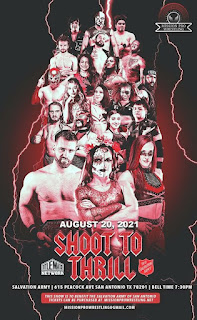 This is a benefit show for the area Salvation Army and they’re also looking for volunteers to get signed up for the holiday season. MPW owner Thunder Rosa is not at the show because she’s with the AEW crew in Chicago for AEW Rampage and the other AEW tapings for YouTube. To donate or volunteer online go to www.salvationarmysatx.org

Joe Galli is the ring announcer. Brittani Nikole and Nigel Rabid are the commentary team.

For the record, Thunder Rosa beat Heather Reckless by submission at the AEW tapings before AEW Rampage. Reckless is a student of the Black and Brave Wrestling Academy owned by Seth Rollins and Marek Brave.

The W.O.A.D. pinned Kayla Sparks after the hip attack in the corner.

Drew Who and Pac Ortega beat Sabotage and Marcello when Who got the pin.

MadiWrenkowski pinned Rache Chanel after a knee strike to the head.

Joe Galli was interrupted in the ring. He got challenged to a match by Chris of the radio showThe Billy Madison Show.Chris had a donation bucket passed around and he told the crowd the stipulation will be the loser gets hit with a strap if fans give money to Salvation Army. Two other guys ran in and attacked Galli’s leg to soften him up.

Joe Galli pinned Chris Sifuentes with a cradle after surviving a figure four leg lock attempt. The two guys who attacked him ended up whipping Sifuentes.

They said Galli was injured and couldn’t continue to do ring announcing so Brittani Nikole will now be doing double duty.

Fuego Del Sol pinned Alex Arsenal after the Tornado DDT off the ropes. Del Sol cut a promo and put over MPW and indie wrestling. He said this is where the future stars come from and he wants fans to always support it.

Jazmin Allure pinned KiLynn King after hitting her with a foreign object while a mystery person dressed all in black got on the ring and distracted the referee. Allure was doing classic heel stalling at the start of the match. King got frustrated and cut a promo on her. Allure responded and told King she would put up the #1 con. spot for the MPW Title on the line in the match.

Posted 8/23/2021 06:13:00 PM
Email ThisBlogThis!Share to TwitterShare to FacebookShare to Pinterest