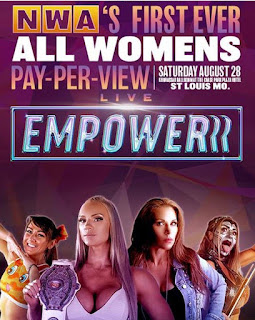 May Valentine interviewed Melina on a set in the venue. Melina will challenge Impact Wrestling Knockouts Champion Deonna Purrazzo later. She said she wished her father was there to see her. Then the feed crashed.

After some technical difficulties, NWA Empowerrr executive producer Mickie James came out to the ring to open the ppv. She said this night wasn’t about her then started talking about getting told “no” in the past about having another all-women’s show (a reference to her time in WWE). She said the whole thing was about inspiring little girls. She will face Kylie Rae on the NWA 73rd Anniversary show tomorrow.

Diamanté won a 3-Way Match over Chik Tormenta and Kylie Rae by pinning Tormenta after her Code Red finisher, stealing the win from Rae with a distraction as Rae had Tormenta in the cross face submission.

Allysin Kay and Marti Belle beat Renee Michelle and Sahara 7 when Kay pinned Michelle after a double team pedigree finisher in a NWA Women’s Tag Team Titles Tournament semifinals match for the vacant titles. Non-stop action throughout with a mix of brawling and wrestling.

Gail Kim came to the ring to cut a promo but was interrupted by Taryn Terrell, JennaCide, and Paola Mayfield (aka Blaze).Terrell is still doing a Beautiful People type gimmick in 2021. She said NWA is her territory and demanded Kim leave the ring. Kim refused so Terrell was going to send Blaze and JennaCide after her. Awesome Kong came out to back up Kim. She took out Blaze ant JennaCide as Terrell bailed out of the ring. As Kim yelled at the heels, Kong asked her to face her in the ring. Kong got on the mic and said she’s not much for words and it’s been a long year at her house. She said Gail Kim was the only person to get her off the couch to come back for anything. She said she loved Kim. Kim was crying and said she didn’t know what to say but she and Kong will always have a bound for life.

Impact Wrestling Knockouts Champion Deonna Purrazzo beat Melina by trapped arm and half crab combo submission. They were given lots of time. Melina walked out with help from the referee but she was limping.

Madusa came out to do guest commentary. They said she will present the tag team titles to the winners of the tournament.

Allysin Kay and Marti Belle beat Red Velvet and KiLynn King in the NWA Worlds Women’s Tag Team Titles Tournament finals match to win the vacant titles when Belle pinned Velvet after an assisted AK-47 finisher. Madusa brought in the tag belts and congratulated them. King and Velvet looked like they were going to attack the new champions from behind but ended up congratulating them and showing respect.

NWA owner Billy Corgan politely walked near the broadcast table looking a member of the crew. He held “The Burke” under wraps in his hand which is the NWA Women’s Title last appearing in the NWA in 1954. He had  Kyle Davis (who is doing ring announcing for the title matches) read a statement from him to the crowd about the history of the title and Mildred Burke. The Burke was unwrapped and brought in the ring to show the crowd.

Tim Storm joined the announcers as guest color commentary. Nick Aldis, Thom Latimer, and Chris Adonis were watching in the Bush Beer VIP section of the crowd to cheer on Kamille.

NWA Worlds Women’s Champion Kamille pinned  Leyla Hirsch after a spear. This was a great showcase for both. Hirsch stood on the top of the ring post and gave Kamille a twisted suplex off the ropes. She then followed up and gave everything she had including several German Suplexes and a shining wizard. She locked in the arm bar a couple times but Kamille powered out. Hirsch kept coming at Kamille nonstop and finally got caught with the spear.

Kamille went over to the VIP area to celebrate with Latimer, Aldis, and Adonis and acted cool and relaxed about surviving Hirsch. Trevor Murdoch got close and started yelling at Aldis to hype their match tomorrow at NWA 73.

The Gauntlet Match main event is next. 10 women. Two start off with someone in every two minutes. Pin and submission rules. The winner faces Kamille for the title tomorrow at NWA 73rd Anniversary live on FITE at 8pm EST.

#3 is Bianca Carelli who is the daughter of Santino Marella.

JennaCide pinned Carelli after a swinging slam for the first elimination.

Jennacide pinned Thunder Kitty but the camera didn’t really catch it as it was focused on Lady Frost stalling on the outside before the next entry came out.

Malenko briefly brawled with Lady Frost on the outside and threw her in the ring. It didn’t last as Frost quickly escaped back to the floor.

Keira Hogan pinned Debbie Malenko while Malenko had Green in a surfboard.

Slamovich, Senegal, and Green pinned JennaCide after triple teaming her down.

Slamovich pinned Keira Hogan after a Tower Of Doom spot assisted by Green and Lynn.

Lynn and Green are the last two.

Chelsea Green pinned Tootie Lynn after the unprettier to win the match and the #1 con. spot. Green picked Lynn up and hugged her afterwards. The locker room came out to celebrate. The baby faces surrounded the ring while the heels stood on stage in the back. Mickie James, Gail Kim, Jazz, Madusa, and Awesome Kong applauded on stage. Green was given a trophy cup for the win.

This was a great show. Everyone worked their tails off. It wasn’t just the best American women’s ppv of all time (there hasn’t been many), it was the best NWA ppv so far under Billy Corgan ownership. It didn’t drag and all of the matches were good to great.

Posted 8/28/2021 10:43:00 PM
Email ThisBlogThis!Share to TwitterShare to FacebookShare to Pinterest