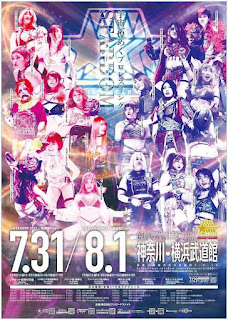 This event will only be available to order and watch as a ppv until 8/3/21 then it goes to STARDOM World as VOD. It’s Japanese commentary only because there was no English simulcast broadcast team available this weekend due to other commitments. Haruo Murata is part of today’s team with Yuzuki Aikawa. Aikawa won the very first 5-STAR Grand Prix over Kyoko Kimura back in 2012 and she is a former Wonder of STARDOM Champion and a former Goddesses of STARDOM Tag Team Champion (with Yoko Bito).

Ruaka and Rina won a 3-Way Tag Team Match over Mina Shirakawa and Lady C… Koguma and Hanan in 5:11 when Rina pinned Hanan with a jackknife cover. This was a dark match.

They aired the same great video package from last night showing footage of all the past 5-STAR winners from 2012 to 2020 to open the show.

Unagi Sayaka pinned AZM with the Taigi De Atta in 8:21 of a Blue Block Match for 2 points. This was a fantastic opener with nom stop action. AZM gave Sayaka a brutal looking diving double stomp right to the gut. Sayaka dumped AZM face first to the mat after a Code Breaker out of the corner then followed up with the Frog Splash but AZM kicked out.

Starlight Kid pinned Saki Kashima in a Red Block Match after her Black Tiger PilefDriver finisher for 2 points in 8:46. Kashima was down on the mat favoring her head in pain afterwards but Kid showed no sympathy. Kid gloated and lifted Kashima up ton put the black mask on her and then walked out of the ring to the back with the mask.

NatsuPoi pinned Momo Watanabe with a high speed style cradle in a Red Block Match for 2 points in 9:44. Watanabe battered NatsuPoi’s head with kicks. She hit the B Driver later on in the match but couldn’t follow up for the pin because of feeling the pains of an earlier submission attempt by NatsuPoi.

Tam Nakano pinned Konami with the Twilight Dream Suplex in a Blue Block Match for 2 points in 10:45. Konami back jumped her after the ring introduction and tossed her to the outside. She viciously attacked her arm by sandwiching it between a chair and ramming her arm first into the ring post. She then hit Nakano’s arm with another chair on top of it. She went back into the ring and sat in the middle hoping Nakano would get counted out. When that didn’t work, she tried to use the Triangle Lancer submission on her arm.

Utami Hayashishita pinned Saya Kamitani in a Blue Block Match after the BT Bomb for 2 points in 14:19. They shook hands and hugged afterwards. Kamitani managed to hit the Star Crusher but it wasn’t enough to keep Hayashishita down.

AZM is with the announcers as guest commentator.

Syuri pinned Maika in a Blue Block Match after her flamer driver finisher. Hard hitting match that saw them at one point get each other in a knuckle lock and repeatedly head butt each other in rapid fire motion to try to get the other to break the hold. Time of the fall was 16:38. Syuri cut a promo and said Maika has a bright future but she will not win the tournament this year because she is going to win it.

Mayu Iwatani pinned Giulia with a Dragon Suplex in 18:30!in a Red Block Match for 2 points. This was another match of the year candidate. Giulia gave Iwatani a dangerous looking Hangman’s Neckbreaker off the apron onto the floor. Iwatani made it back in the ring at the count of 19. Giulia hit her in the back of the head with a missile drop kick followed later by a release German Suplex. Iwatani recovered and delivered a crucifix driver. She went for the Moonsault but Giulia caught her in a submission hold. Iwatani managed to get out of it and blasted Giulia with a series of kicks and another Moonsault. Giulia fought back and got Iwatani with a Glorious Driver. She was going to try for another one but Iwatani reversed it and gave her a Tombstone Piledriver. Iwatani cut a passionate promo and said she will win this year. She won it back in 2018.

Posted 8/01/2021 03:47:00 AM
Email ThisBlogThis!Share to TwitterShare to FacebookShare to Pinterest