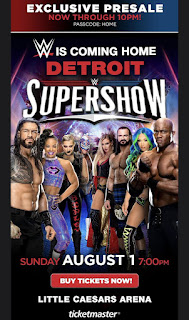 This is the first WWE Detroit show since December 27, 2019 because of the virus pandemic. Drew McIntyre was on local media this weekend to promote tonight’s return event. The crowd is very lively and in a festive mood. It’s one of the biggest crowds here in some time for a house show.

Big E. pinned Seth Rollins after the Big Ending. The crowd was all over Rollins chanting “We Want Becky!”. He arrogantly reacted with the body language and gestured that they should be cheering for him instead.

The next match is Sheamus vs. Drew McIntyre. Jinder Mahal attacked McIntyre before the match like he’s been doing on these SuperShows.

Drew McIntyre pinned Sheamus in a non-US Title Match after the Claymore Kick. Jinder Mahal  also got a Claymore Kick when he went after McIntyre again.

Legendary Detroit Red Wing Darren McCarty is at the show. He’s made guest appearances for Insane Wrestling Revolution in Monroe, Michigan that Rhino is involved with. Their next show in Monroe is 8/26.

WWE Champion Bobby Lashley and MVP beat Kofi Kingston and Xavier Woods and left them both laid out after.

Adult actress Kendra Lust is in attendance. She’s a Michigan native and a huge fan of pro wrestling and MMA. She has a YouTube show that covers it along with the adult entertainment industry. It’s called Beauty & The Beast.